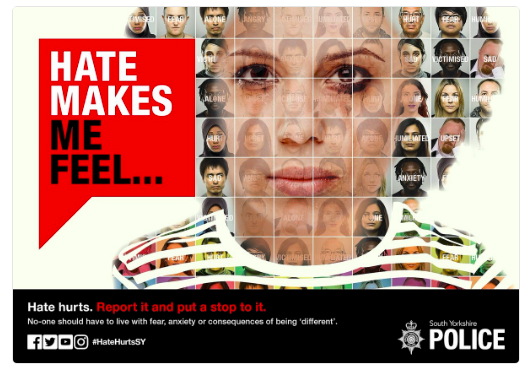 2019 has already started off with many global far right headlines.  It can be predicted that the year will see a further increase in far right extremism and hate speech.  Populist representation in government is on the increase in Europe, fuelling nationalism and anti-immigrant sentiment.    In Germany the right wing AfD (Alternative for Germany) is on the rise.  The Freedom party is in the Austrian Government, and Victor Orban has been reselected in Hungary, with an even larger majority.  In Spain, an anti-immigrant grouping called Vox has just won seats in the Andalusian government, the first far right encroachment since Franco’s time.  In Italy, the populist League is now level with the Five Star movement, both on 29% in the polls, with a message of criminalising the whole process of refugees coming in by boat. And in the UK, the whole Brexit process has seemingly legitimised the expression of anti-immigrant, anti-refugee, anti-Semitic (‘5% of UK adults do not believe the Holocaust took place’) and anti-Muslim  views (‘Man arrested after racist rant about Muslim schoolgirls who ‘should have ovaries burnt ‘).  Tommy Robinson may have been (temporarily) prevented from fundraising through social media, but counter-terror units in authorities such as the West Midlands police are now reporting that one-fifth of their threats are from extremist far right groups.

We know from research that terror attacks lead to an increase in anti-Muslim rhetoric.  Real time events deeply influence on-line activity, reported by organisations such as Tell MAMA.  This discourse often often conflates refugees and Muslims with Islamic fanatics. Governmental organisations, United Nations Refugee organisations and NGO’s have called for social media platforms to step up their efforts to block hate speech.

Perceptions and boundaries around hate speech and hate crime.

The question is when hate speech becomes hate crime and therefore subject to stiffer prosecution – and what role the general public has in reporting.  While there are differences across countries in definitions of hate crime, the official definition in the UK, as agreed between the Crown Prosecution Service and the police is

The debate around this often relates to the question of ‘perception’ – yet the key is that it must still be a criminal offence – not just someone being rude or antagonist or even misogynistic.  Extremist speakers may well know the boundary and what they can get away with – Anjem Choudary was adept at this.  A ‘league table’ of universities allowing ‘extremist speakers’ was reported recently, linked to the debate about free speech versus hate speech.  One speaker avowed that women who commit adultery should be stoned. But this speech is not a crime, even if the act would be (in the UK).

The list in the definition of hate crime relates to people with the official identity of nine ‘protected characteristics’ by the Equality Act 2010 – minorities, women, age etc.  A second problem with the definition of hate crime is therefore that the list does not include ‘immigrants’ as a category – so political parties can be anti-immigrant and implicitly condone violence without this coming into the classification of a hate crime.

Yet in some ways hate crime is easier to identify and report than violent extremism, because of the woolly definitions of extremism that (in the UK at least) are in use. In spite of criticism, this still relates to ‘opposition to British values’. In Denmark in contrast, the definition is;

Extremism refers to persons or groups that commit or seek to legitimise violence or other illegal acts, with reference to societal conditions that they disagree with. The term covers e.g. left-wing extremism, right-wing extremism and militant Islamism.

‘By reporting [incidents] when they happen to you, you may be able to prevent these incidents from happening to someone else.  You will also help the police understand the extent of hate crime in your local area so they can better respond to it.  Reporting makes a difference – to you, your friends, and your life’.

1. Make it easier for communities to understand the limitations of the law, their rights, how immigration is sensationalised by far right groups and what constitutes a hate crime.  Encouraging communities to report hate incidents to the police, done easily for example through the website True Vision, Tell Mama, Crime Stoppers or other trusted bodies.

2. Social media: Understanding how fake news is shared online and how this space is exploited by the far right.

3.  In the UK, extending the emphasis in the Prevent duty to recognising crime, not just ideological extremism. This does not mean criminalising young people in schools or communities for what they say or think, rather that teachers and students should be given tools to distinguish hate crime and know how to report it.

Clearly, there can be all sorts of false reporting and accusations, but it is better that hate crime and hate speech is continually surfaced and penalised, whether on line or off line.  We believe building resilience to radicalisation begins with the understanding of how hatred is fomented – and the range of people, including politicians, who may be culpable.

About Us |We deliver training & research around tackling extremism and exploitation