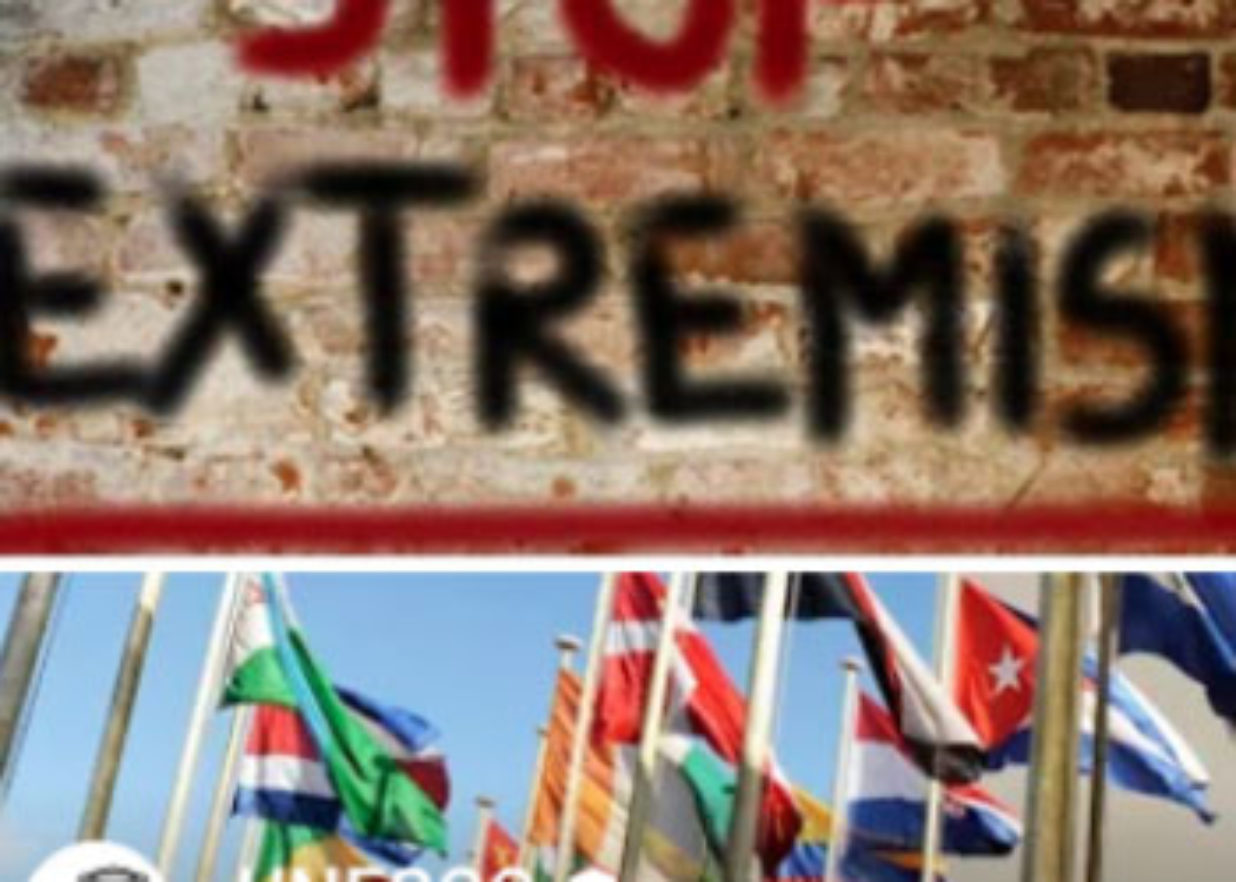 Professor Lynn Davies: This article first appeared on the UNESCO International Conference website to mark the Preventing Violent Extremism through Education event organized with the Mahatma Gandhi Institute of Education for Peace and Sustainable Development, in New Delhi, India. Sept 2016

Hard power is not enough to counter violent extremism based on hatred and ignorance. How can education help? What should we do to build resilience to propaganda among youth around the globe? How should schools address the issue? Should teachers have a surveillance role?

Whether education can help in the global race to prevent violent extremism (PVE) is not a straightforward matter. We start from the fact that there is no one internationally agreed definition of extremism, and that it takes many different shapes – religious, far right, neo-Nazi, far left, animal rights and even climate change activists. What is more, within these movements there are many different and ever changing variants locally, with equally shifting methods and targets.

A further complication is that there is no one route into radicalization, so there is no single target that we can isolate and provide an antidote. Poverty might be a factor, for some, in a country like Somalia, but not all poor people become extremists. Foreign policy cannot really be influenced, nor can the major faultlines of sectarianism. Educational institutions cannot be held as major players in counter-terror.

Nonetheless, those of us working in the PVE field have to believe that education can do something. It does not have military power, or negotatiating power; but it does have some power over the spread or containment of ideas. It can help build resilience to propaganda, to the enticements of extremist groups, to the myths and bold narratives which can be so attractive.

How is resilience built?   The first reminder is that you do not build resilience through harsh discipline and authoritarianism. A lack of critical thinking and unquestioning obedience to rules can all feed the extremist mindset and the acceptance of violence as a solution to a problem. Nor do you build resilience through ‘character’ education: many extremists will demonstrate courage, a sense of justice, grit, determination and all the attributes that are promoted in the current fashion for character and virtue education. It is how you use your attributes that counts. But conversely, you do not build resilience by some bland form of peace education, preaching love and inner harmony. Fundamentalist movements will often stress intense group love, or love of a God.

Instead, the perhaps counter-intuitive strategy is to create tension and positive conflict. To avoid the black and white, binary views of extremists, young people must be exposed to clashes of perspectives, to dissent, to the constant possibility of alternatives (which is the essence of a democracy). The best virtue is a degree of cynicism. Rather than just ‘respecting diversity’, they must be given skills and frameworks to make judgments on what to tolerate and what not to tolerate in their social and cultural world.

Building confidence:  In ConnectFutures, we bring youth together across a range of backgrounds and teach skills of debating, arguing and predicting others’ arguments.

In a very short time, we find we can teach them media skills and the use of social media platforms such as Twitter, so that they can face a TV camera and mount an argument on a controversial issue, or use social media for campaigning. Underpinning this process is building confidence – particularly in young people who are not used to speaking out or even telling their stories. We foster joint problem solving with the police, so both sides understand the value of community engagement in the fight against violent extremism. It’s about stretching horizons and the possibilities for interaction.

Being exposed to different histories is also important – from our research with former extremists, we have developed a video of them talking about their experiences, why they joined and why they left. The research found how their thinking became more and more narrow within their movements and then more complex again once they started to question the ideologies.

Value pluralism:  Similarly, expert psychologists at the University of Cambridge have developed programmes in ‘integrative complexity’ – enabling students to embrace value pluralism, learning how to recognize and validate a wider range of viewpoints in themselves and others. In countries as far apart as Scotland and Pakistan, students are introduced to ‘hot topics’, and a range of views generated in safe spaces for discussion. Rather than focusing on the content of ideology or beliefs, the focus is on the structure and greater complexity of thinking. Participants can see religious and secular, for example, not as enemies or choices to be made, but as both able to be protected and to co-exist.

Knowledge of rights:  But value pluralism does not mean simply accepting all values as equal. PVE work needs to be set within a framework of understanding of rights. Human rights are what are called ‘enabling constraints’: they enable certain freedoms – of life, religion, speech, dignity – while ensuring that these rights are upheld through the constraining rule of law. A lens of rights enables young people to discuss controversial topics such as female genital mutilation or gay marriage and question who has the right to decide, and who needs to be protected because of the right to certain freedoms. Knowledge of rights (and the difference between absolute, qualified and limited rights) helps people decide their inner core of principles while understanding how others might see the world differently.  Students can resist extremist messaging by understanding how universal rights mean that violence, rape, torture, kidnapping cannot be justified just because someone has been designated an enemy.

Networks to counter extremism:  After learning about argument, gaining confidence and understanding rights comes the fourth aspect of a preventative role, which is harnessing the power of communication networks. Young people across the world are hugely networked – whether just chatting or posting pictures of themselves, or searching for information. The question is whether educational institutions can capitalize on this facility, to encourage networks of young people to counter violence.

There are a growing number of international networks for young people to counter extremism, for example ISD’s (Institute for Strategic Dialogue) YouthCan (Youth Civil Activism Network) which mounts innovation labs where campaigns are generated. These range from satirical videos about eating halal meat to digital comics to raise awareness of rights and extremism in Africa. There are international learning platforms such as E-twinning, which are considering how to use this for PVE. UReport is a growing movement whereby young people use SMS messaging to research their communities and mount campaigns against all forms of injustice. This started in Uganda, but is now an international force. Young people are also generating their own materials, for example films on propaganda through the organization Digital Disruption, such as the satirical The Vampire Conspiracy. Also delighting in humour is the animated series Burka Avenger – created by Pakistani artist, singer and activist Haroon – where the super heroine helps fight injustice, and engages in bold actions such as saving girls’ schools.

But if students want to start a network for themselves, there are a number of skills needed – how to design a campaign, how to lobby, how to manage finance, how to build alliances, what the legal restrictions might be and how to ensure sustainability in a highly fluid young population. All this should be part of a good political or global citizenship education.

Bulwarks against propaganda:  Thus a really preventative school knows to address and combine those four aspects – value pluralism, confidence, rights and networks for social action. Simply building confidence and expanding networks could be (and is) used by extremist groups to gain recruits. Conversely, simply opening up ideas without giving extra confidence, skills and mechanisms to challenge inequity leads to frustration and can be counter-productive. Knowing what to do with a grievance is part of learning how to create change, not just to protest. And engaging in social action might be some bulwark against the adventures and excitement promised by jihadist groups.

A final note of caution relates to the possible role of the teacher in identifying those individuals ‘at risk’. Should teachers have a surveillance role? In countries such as United Kingdom, this is part of the school’s duty, but has led to criticism resulting from some instances of misunderstanding and overreaction, and stigmatizing of Muslim communities.

The reality is that there is no one path into extremism, no one set of signs of vulnerability, no one community especially hazardous. Increased arguing, dressing in a particular way, being active on social media or becoming more religious or political might be typical of any teenager searching for their identity.  Nonetheless, there are signals which put together could be cause for alarm, for example when students express polarizing, paranoid or hateful views, when they are becoming isolated, when they claim they are being victimized, when they reject the rules of authority based on ideological grounds, when they spend time on the computer looking at extremist groups or posting pictures of fighters on Twitter and when they start to support violence for a cause.

Unless the signs are immediately alarming (if a student is known to be taking part in extremist group activities, engaging in recruitment of others, planning violent acts, learning about weapons or planning a trip to a conflict zone), the key strategy is discussion with colleagues, parents, governors and community leaders as well as the students themselves before any sudden referral to authorities. Schools and colleges need to have processes in place for logging of concerns and also awareness of referral procedures locally and nationally. But schools cannot always tell – and we have examples of young people going off to fight in Syria where neither school nor parents had any warning.

All that schools and youth projects can do is provide the safeguarding and resilience mechanisms outlined above and hope that this generation will not join up to violent extremism for themselves nor become part of a community that supports violence in the name of a cause.

Lynn Davies is Emeritus Professor of International Education at the University of Birmingham, United Kingdom. Her interests are in education and conflict, extremism and education in fragile contexts, and she has done research and consultancy in conflict-affected states such as Afghanistan, Bosnia, Angola and Sri Lanka. Her UK work includes evaluating programmes to counter extremism and radicalisation, a project interviewing former extremists about their backgrounds, and training young people and teachers in preventing violent extremism. In October 2014 Lynn was awarded the Sir Brian Urquhart award for Distinguished Service to the United Nations and its goals by a UK citizen.