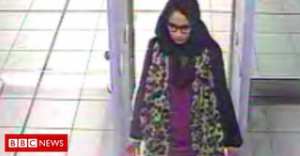 “I’m not the same silly little schoolgirl who ran away four years ago.” Shamima Begum

The discovery of Shamima Begum in a refugee camp in Syria has, for now at least, diverted headlines from Brexit and onto the difficult debate about what the UK and other countries should do about their citizens who have left to join the so-called IS ‘Caliphate’.  There are numerous moral dilemmas.  As it is the primary duty of the State to keep its citizens safe why would we even consider allowing individuals who have fought and supported a brutal terrorist organisation back into the country, thus potentially exposing everyone to danger?

Understandably there will be calls to leave them where they are, but there are two key things to consider.  Firstly we are potentially creating a more dangerous situation.  The region is still incredibly volatile and the Kurds and other groups may not be able to hold the captured fighters for long.  I’m not sure that there is a willingness or capability to prosecute all IS fighters and families there.  Already there are established smuggling routes back through Turkey that fighters have used to escape and can still be used.  We would then face the prospect of fighters and families arriving undetected back in the UK – perhaps assisted by whatever border chaos follows Brexit.  In these circumstances perhaps controlled repatriation of those we have to take back is better.

Secondly we have obligations under international law that we have to uphold and they apply to all UK citizens, unless of course they are held for good reason in another country and are to be prosecuted for crimes committed there.  It is the same principle that allows us to deport foreign criminals from the UK and we need to uphold our obligations, no matter how difficult that is.  If we could have disowned them like many of them disowned the UK we would have done so, but the government is only able to remove citizenship from those that hold dual nationality.  The Geneva Convention prevents people being made stateless.

If we do repatriate what next?  Without doubt it is not going to be easy.  We will be dealing with everything from murderers through to psychologically damaged and indoctrinated children to babies and toddlers.  The first thing that should happen is that the full force of the law should be applied fairly and without exception.  Where there is evidence of terrorist offences, the CPS should bring a prosecution.  There has to be a deterrent for the future.  We have a counter terrorist network in the UK who have the capability to gather all of the available evidence and they should be given the extra resource to do this.

There will be those for whom prosecution is inappropriate or impossible through a lack of evidence, particularly women and children.  This is where we need to generate a well funded and all encompassing rehabilitation programme involving law enforcement, health, social care, specialist support and probation.  The issue is so complex that it will have to be a bespoke network of highly motivated specialists and has the right funding and high level commitment.

How do you reintegrate a child who has been exposed to IS indoctrination and potential combat training back into mainstream education?How do you protect the communities they return to?  This is all going to take time and expense which should come in the form of extra funding.  We have the government’s Desistance and Disengagement Programme, a new element of Prevent, and which does apply to returnees on Temporary Exclusion Orders (TEOs) but it is not all encompassing.  A full programme of rehabilitation will need some teeth. We shouldn’t hesitate to remove children from parents who are seeking to turn them into the next generation of terrorists.

What will be key is the credibility and ability of those charged with dealing with the returnees.  Specialist support might involve psychological counselling and theological support.  Those providing specialist support need to be of the highest standard. Drawing individuals away from the toxic IS brand is a job for experts who know their stuff and can reach those they are dealing with.  It will also be important to involve the wider community and harness their support and advice.  Support for the families of the returnees who were in many cases torn apart by events will be vital.

We face a huge and complex problem.  We have seen fighters return from places like Bosnia and Afghanistan before but what is different with Iraq and Syria is the numbers of potential returnees, the fact that many of the returnees will be women and children and that they have been associated with perhaps the most brutal terrorist organisation we have seen.  We need to have a plan to ensure the safety and security of the UK and its citizens and we need to start now – and make it persuasive.

Public perceptions will be mixed:  in ConnectFutures training in schools and colleges around extremism, our trainers are already predicting conversations among students (and teachers) around Begum’s age and gender, brainwashing, whether victim or extremist, whether repentant or still violent and whose rights prevail.  Teachers’ knowledge of the law on terrorism and returnee status will be helpful here.  As with programmes on integration of refugees, national plans on rehabilitation need a strong educational element for communities to support reintegration and its necessary funding.

Richard Horton is a security professional specialising in counter terrorism and intelligence management.