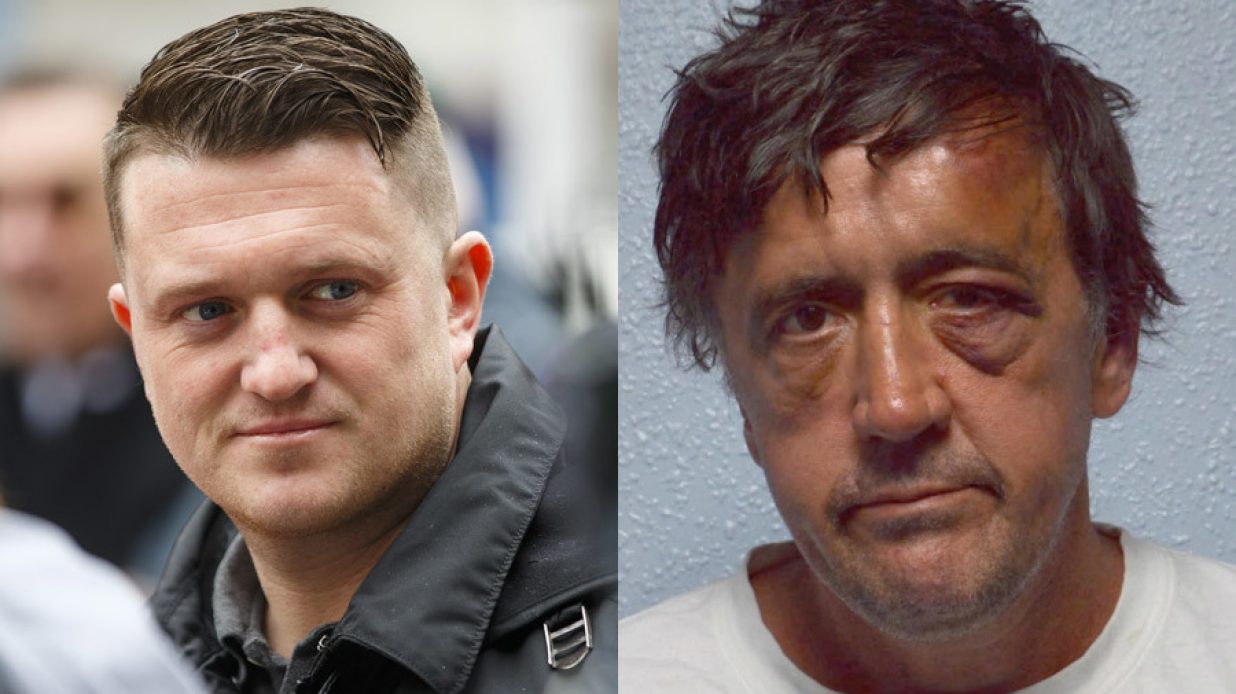 New issues for teaching about terror are thrown up by the case of Darren Osborne, convicted in January 2018 for murder and attempted murder after he drove a van into a crowd of Muslims near a mosque in Finsbury Park, London.

The case was unusual in the speed with which Osborne was ‘radicalised’, and by the fact that there was nothing illegal in the material he looked at on line.  One trigger was watching Three Girls, the BBC drama about victims of sexual abuse committed by mostly Asian men in Rochdale.   He became obsessed with Muslims, accusing all of them of being rapists and part of paedophile gangs.  He did ‘research’ on the internet.  The Court was told he received messages from former Far Right leader of the English Defence League, Tommy Robinson, that he saw a message on Twitter from Britain First deputy Jayda Fransen (although this was a group message to a number of followers) and that he had accessed an article on the InfoWars website entitled ‘Proof: Muslims celebrated terror attack in London’.  There followed lots of searches on his ipad for Robinson.

The question then arises over whether Osborne was ‘simply’ deranged and/or did have a solid ideological motive.  He claimed in court that he also hoped to kill Jeremy Corbyn (because Corbyn was nowhere to be seen in Rotherham) and the London mayor Sadiq Khan.  He later denied responsibility, blaming his actions on a made up character called Dave.  This is not the stance of a committed martyr for an identifiable cause.  Osborne had twice tried to kill himself and was referred to an NHS centre for drug and alcohol abuse.  Is this less about radicalization than about mental illness?  Osborne was not ‘groomed’ in a sustained way.

However, interestingly, the CPS said it prosecuted the case as a terrorist offence because Osborne’s actions were in order to advance a political purpose.

Definitions of terrorism in international agencies are usually that terrorism refers to a particular strategy adopted to achieve a political goal, which is the deliberate creation and exploitation of fear.  It is not clear that Osborne was doing this, and it could be said that his actions are more those of hate crime.   Yet there have been complaints that he was not finally charged with terrorism, but with murder.  But legally, this has to be the case.  In this country, there is no offence in law of being a terrorist.  Both the killers of Lee Rigby and of Jo Cox were tried for murder.

As the Independent Reviewer of Terrorism Legislation, Max Hill QC, reminds us, in this country, the law does not convict people for ideology. There is no distinction in criminal law whether a perpetrator is a neo-Nazi or Islamist extremist – which is important when people think there is some sort of legal bias, or playing down of Far Right crime.  To be convicted, an act has to be committed – we do not prosecute for thought crime.  There is no offence of ‘aspiration’.

In educational institutions, the strategies around tackling all types of extremism have until now been cast somewhat similarly –  critical thinking, challenging black and white views, providing safe spaces for discussion, internet safety.   But the appeal of extreme nationalism may not be quite the same as the appeal of extreme jihad.  EDL do talk of ‘white jihad’ to attract that same kind of youth who are drawn to violence, and their enemy is non-whites.  But the white jihad is confined to the local community, not the global ummah.  Far Right groups are able to whip up hatred and fear not just around sex-grooming gangs but also around migrants, refugees, and cultural takeovers – visible symbols on a daily basis.   They also play on threats to the purity of the nation.  Hence anti-extremism work in schools needs to examine the threats posed by extreme nationalism – fuelled by Brexit, and, possibly, by excessive zeal over so-called ‘British’ values.

Educating against Far Right extremism could include consideration around four areas:

Processes:  there may be slow processes of individual grooming, but also personal acceptance of the mass of Far Right, racist and anti-Semitic stuff on the media. Films of former Far Right extremists can help young people understand how quickly a call of duty becomes acceptance of violence. The Far Right cannot offer paradise – but it can offer being a saviour to preserve fundamental values and culture.  The consequential logic is simple:  Do you not agree that this is wrong?  Do you not agree that something should be done?  Do you not want to be part of that doing of something?  Is it not your duty to be part of this, however much violence is needed?  Interrupting that logic is essential in building resilience.

Sub-texts:  Resilience includes awareness of the sub-texts of what is read.  Islamist hate speech may be easy to spot, but Far Right messaging may be more disguised.  Antennae need to be sharpened to spot the trajectory from implicit racism to overt racism to hate speech, with awareness of what is legal and what is illegal.  It was possible to convict Anjem Chaudhury for hate speech because his utterances were deliberately designed to incite violence.   But Far Right racism may look factual or even socially caring, for example, stressing immigration being the cause of the housing crisis.   Britain First would often couch Islamophobic messages in posts that were ostensibly about child abuse, women’s liberty, or humane slaughter, which initially gained thousands of innocent adherents on social media until their real messages were exposed by anti-fascist groups.   While organisations such as National Action tweeted things like ‘Jo Cox would have filled Yorkshire with more subhumans’ after her murder, other messages are less strident:  one of the former extremists we interviewed was initially seduced by the EDL by being told about ‘illegal asylum seekers’ in his locality – when this does not exist as a category.  Awareness of legalities around refugees and asylum seekers and local context is important in understanding rights and threats to these.

The potential menace of official Far Right parties. Gary Younge in the Guardian talks of ‘how the Far Right has perfected the art of deniable racism’ in US and Europe.  Its task has been how to attract racists and xenophobes while denouncing racism and xenophobia.   UKIP have had this problem:  Jo Marney, the girlfriend of UKIP leader Henry Bolton was so upset by Prince Harry’s black fiancée Meghan Markle she wrote, ‘This is Britain not Africa’ and that Markle would’ taint the royal seed’.  She worried that black people were ‘pushing their way to the top slowly, slowly.  Next will be a Muslim PM – and black King’.  But Marney is no outlier in official parties.  One of UKIP’s MEPs said we should stop sending aid to ‘bongo bongo land’.  Trump is on record for calling certain countries ‘shitholes’.  None of this garbage is illegal; and Far Right parties and their messages are becoming ever more acceptable.  UKIP ‘won’ the Brexit referendum, Trump is still in the Oval office, AfD (Alternative für Deutschland) become the third largest party in Germany and the Front National made the presidential runoffs again in France.  It is urgent that young people understand and are able to discuss the appeal and reach of such parties and how they use nationalism to inflame hatred and racism – and to what ends. What is the political reality of white supremacy actually happening?

Resistance and counter strategies.  In our experience, students are interested in how neo-Nazism and fascism can be, and have been, challenged without more aggression and escalations of violence.  There needs wariness about collectives such as Anti-Fascist Action, which includes groups who campaign with slogans such as ‘It’s OK to beat up fascists’.  There is an irony for Far Right groups that Islam can be harnessed as a powerful and more peaceful antidote to fascism.   Last April, the EDL rally was convincingly upstaged by the Birmingham Central Mosque British Tea Party, with biscuits.   The two-hour event was attended by more than 300 young and old people of all faiths – and they outnumbered the rally’s 100 activists by an estimated three to one. The only casualty at the tea party was a broken custard cream.  There is then the refusal to be drawn into hatred and revenge:  the Finsbury Park imam Mohammed Mahmoud who urged an angry crowd not to harm Osborne, was praised by a High Court judge for choosing “to respond to evil with good”. The imam told the crowds to hand him “unscathed” to the police and not take justice into their own hands.

As with all educating against extremism, tackling controversial issues, discussing what constitutes justice and reacting to current political events is critical.   This can be difficult, but there are resources which young people respond to well.  ConnectFutures has its films both of former extremists and of those who are affected by extremism, and there is also the interactive film from the group Open Your Eyes To Hate which convincingly tackles the lure of Far Right extremism.

We have found when delivering training in schools and colleges and from our 30 min assembly sessions (Year 4-13) that teachers are unsure about how to reflect and talk about the new normal e.g. Trump or Brexit and about Far Right penetration into our daily lives.  We welcome discussions of such resources and other experiences in schools and colleges that people have of tackling the current issues of Far Right extremism.