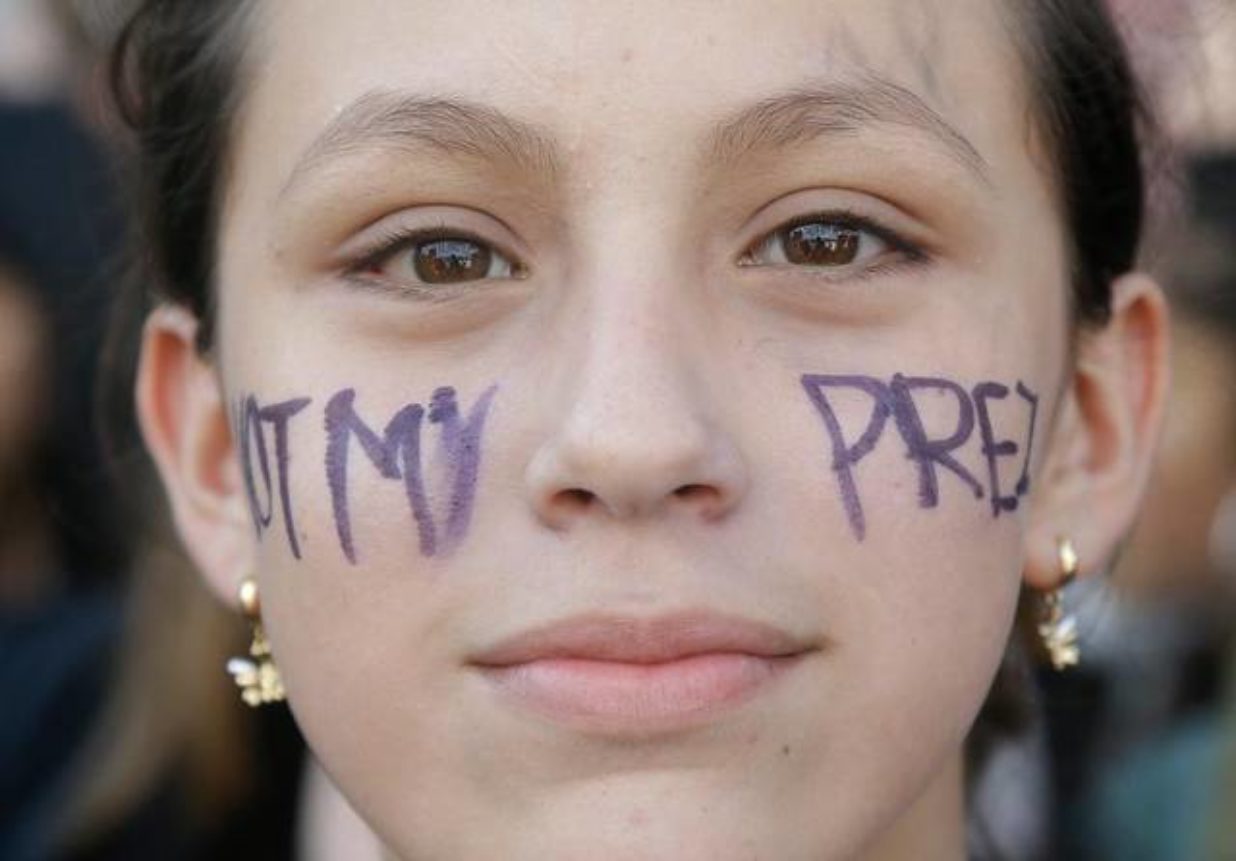 What should teachers discuss about the new American president? One of the banners on the Women’s March in London to protest against President Donald Trump read ‘LITERALLY EVERYTHING ABOUT THIS IS SO AWFUL I HAVE NO IDEA WHERE TO START’.   In some ways, teachers pondering on how to talk about Trump in their classrooms are spoiled for choice. Virtually everything is a ‘teachable moment’. As another banner read, ‘So bad, even introverts are here’.

Yet it may be fruitful to begin a discussion on how to tackle the horrors that are unfolding without frightening the horses, or, more seriously, without being accused of political partisanship. It is impossible to be ‘balanced’ about Donald Trump. I start with a few ideas in the hope this will generate discussion and a bank of some more suggestions and experiences from teachers.

I cannot think of a more cross-curricular theme. The first obvious one is Fundamental British Values (FBV): is it democratic to issue Executive Orders which go against the constitution and which do not have majority backing? Is it against the rule of law? Any discussion of rights looks at the discrimination within the banning of people from Muslim majority countries to enter the US (although apparently Christians are OK). This links to tolerance, respect, liberty – the list is endless and can be tackled in religious education as well as citizenship education. Then there is climate change, and an examination in geography of the ‘alternative facts’ that Trump so readily espouses. Teachers of younger children may have difficulty explaining the ‘pussy’ hats that the women were wearing, but must be prepared for the question, and what it all signifies in terms of the way women are portrayed by Trump.

Frighteningly, Trump is a gift for schools thinking about how to enact their Prevent duty. A discussion of extremism could well centre on whether Trump is an extremist, or even a violent extremist. In the UK government’s definition, he is, as remarked above, in distinct opposition to FBV. By his views on Muslims he is inciting hatred. His pronouncements about who are the terrorists could constitute hate speech. But what Trump does not seem to realize is the international repercussions of his ‘orders’. Rather than mitigating the risk of terror attacks, he is confirming the claim that there is a global war on Muslims, a view which is played upon by those seeking to recruit young people into groups such as ISIS. A greater number of impressionable Muslim youth across the world will be convinced of their duty to protect Islam and to avenge the insult to their faith. The US is heading for more terror, not less.

At ConnectFutures, we are launching an additional 10 minute video based on research on former extremists (Islamist and far right) featuring Rozin (Yazidi activist) and Faizal (community advocate) – together with a resource guide for teachers on how they might use it. One could easily add Trump into the mix as a contrasting current extremist, to enable exploration of his (warped) logics, manipulation of opinion, stereotypical black and white thinking, and denial of factual evidence. In the run up to the US election, the general assumption was that Trump was so extreme as to be laughable. But we now see how attractive extremism can be. It is a lesson for us all.

I would be interested to know then how these lessons are translated into actual lessons, and how US teachers as well as UK teachers are tackling this. Do let us know what you think.